Huawei lists eight phones that will get Android Q update

Following Google’s official Android Q announcement at its annual Google I/O conference, its partner companies have started to reveal which phones would get the stable iteration of the next OS. Huawei is one of those partners and it has announced a list of eight phones that will get the Android Q later this year. Reportedly, this is the first batch of Huawei phones that will receive the update, which means that more phones could be added to this list later.

The phones that will get the Android Q stable update are: Huawei Mate 20, Mate 20 Pro, Mate 20 X, Mate 20 Porsche Edition, Huawei P30, P30 Pro, Honor V20, and Honor Magic 2. However, there is no information about the timeline for this update. In the last two years, Google has rolled out the stable OS update for Pixel devices in August, so this year is likely to be no different. 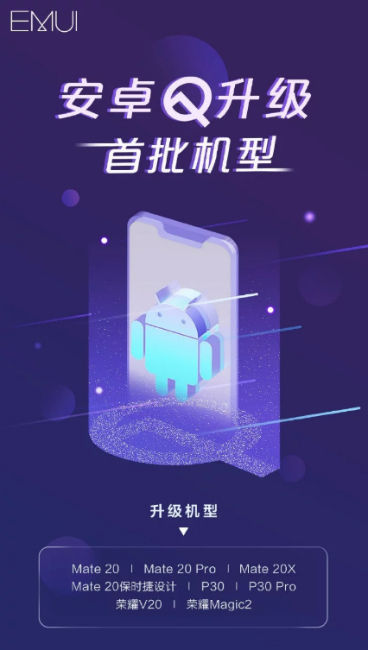 The upcoming Android release focuses on bringing new mobile experiences, more control of privacy and enhanced security. It introduces several new features, including Live Captions and Smart Replies, Dark Mode, Focus Mode, and a new framework for updates under which the users will receive key updates to the operating system automatically in the background similarly to how Android apps update via the Play Store.

But before this is rolled out, the release will have six betas, out of which three are already out. You can see the list of all phones that will get the Android Q beta update here. Also, you can check this article to learn more about what the next major Android release will offer. Further, if you want to experience the Android Q beta on your Pixel device, you can visit this link to enroll your device, and later receive the beta build as an over-the-air update. For the other devices, you will have to manually flash the beta build onto the phone.