Last month, I was invited to the Ottomate Smart Fan launch event in New Delhi, where I sat for what felt like an entire day listening to Vishal Sehgal, Ottomate’s Co-Founder and MD, wax poetic about the company’s first product. Sehgal, who is also the Co-Founder of Lava International (yes, the Indian smartphone brand), explained to me and a few other heavy-eyed journalists that there had been absolutely no innovation in the ceiling fan industry in the past fifty years. Running us through numerous slides, he presented the Ottomate Smart Fan, an advanced ceiling fan operated using a smartphone app.

Curious enough, I got in touch with the Ottomate team and asked for one to be installed in my bedroom. No more than a week later, an Ottomate personnel turned up at my doorstep with a couple of boxes, an installation kit, and a folding step ladder. As he went about installing the fan, he told me that I would need the Ottomate app to use it. As I reached for my iPhone, he said the app was available only on Android. Fortunately, I had an Android phone too, so before long I was able to create an account with Ottomate and register the product. And a little after that, what should I see pop up on the app but a firmware update—for my ceiling fan! Imagine my surprise.

Ottomate: How the system works

Before I tell you about my experience with the fan, let me explain to you how the whole Ottomate system works. The Gurgaon-based company aims to offer a whole range of “smart” consumer durables like ceiling fans, lights, and water heaters that are operable through the Ottomate smartphone app. The idea is that once these “smart” devices are all installed and connected to a smartphone, the user can then control them from any part of the house using the connected smartphone. In an ideal scenario, the user should be able to control the operation of a connected Ottomate device that’s in the first floor from the ground floor without having to get up. What’s more, an entire mesh of Ottomate devices can be connected through Bluetooth Low Energy and controlled using the same app. The primary user can add more users and guests.

In addition to creating “smart” durables, Ottomate wants to simplify the installation process of its devices. According to the company, the user needn’t go to the trouble of calling a local electrician to have their new device installed; once the user has purchased an Ottomate product, they need only download the Ottomate app on their Android phone, open it, and request an installation. They can then expect an Ottomate installation agent to visit their home and take care of the setup. Future service requests too can be made from the Ottomate app.

From the proposed range, the company’s first product is the Ottomate Smart Fan. Designed by Bangalore-based design studio Foley Designs, it looks no different from a regular ceiling fan at first glance but has a few tricks up its sleeve. Sitting next to the motor inside the central dome is a Qualcomm CSR1020 QFN chipset, which is considered the “brain” of the fan. It features a 16-bit processor, 80 kilobytes of RAM, 60 kilobytes of internal storage space for applications, Bluetooth 4.2, Bluetooth Low Energy, and CSRmesh. The fan also has an integrated temperature and humidity sensor made by STMicroelectronics. All this is what lets the fan talk to the Ottomate app on an Android smartphone. The fan can also be operated using a proprietary Ottomate remote control, which is an optional purchase. 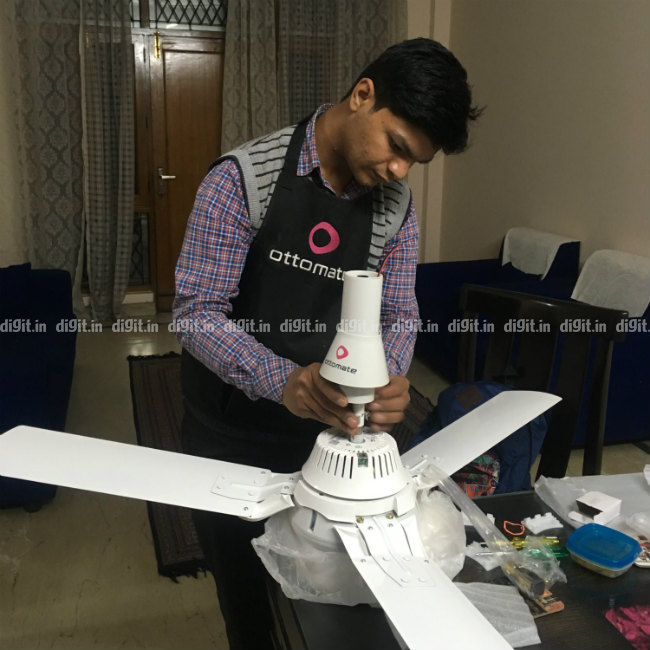 With the installation of the new Ottomate Smart Fan all done, I sat around under the fan playing with the controls on the app. I explored all the speed options available. Unlike a regular ceiling fan, which is typically equipped with a four- or five-speed regulator, the Ottomate Smart Fan could be set to spin at any speed between 1 and 100 with the option of a Turbo Mode, which gave it an additional ten-percent boost after its top speed. There was a Breeze Mode, which varied the speed of the fan every few seconds to create the effect of a breeze. This, I felt, was a bit of a gimmick even though the fan made use of the internal temperature and humidity sensor to work. Of course, I can understand if there are users out there who might actually like such an effect. Lastly, there was an Otto Mode (auto mode, basically), which, as you can guess, set the speed of the fan automatically depending on the temperature and humidity. The Otto Mode predicted the right speed required quite well as far as I could tell.

I have been using the Ottomate Smart Fan for the last two or so weeks now. While my experience has been mostly pleasant during this time, I came across a few unmissable issues. The first is noise. The Ottomate Smart Fan installed in my bedroom is significantly louder than my previous Havells fan at any speed. This, I’m told by my colleague Shrey, could be the result of a bad installation. At any rate, the grinding noise from the Ottomate in the middle of the night—resembling an old fan from the 70s—vexes me enough to believe the Ottomate Smart Fan wasn’t designed smartly enough to run quietly.

The second issue is overall quality of execution. The Ottomate app, which is currently limited to Android users and has no integration with Amazon Alexa or Google Assistant, needs the user’s location at all times to run, something users concerned about privacy (like me) will not want to provide. On launching, the app loads (read: communicates with the fan) for some four to five seconds before letting me control the fan. Working the speed slider in the app can, at times, be a bother while setting a precise number. On pressing the back button, the app persistently asks if I really want to quit. All these niggles give me the impression that I’d have sooner operated the fan by getting up from my bed and reaching for the regulator on the wall. The lack of a bundled remote control only adds to my annoyance because, honestly, it would have still been faster than using the Ottomate app. 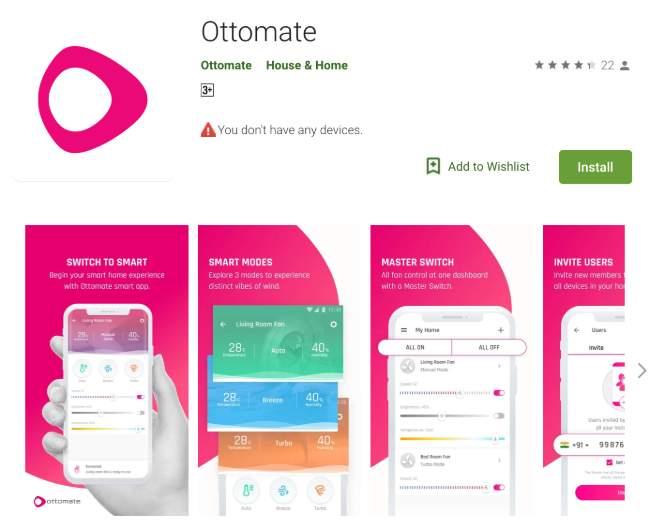 Ottomate app only available on Android for now

Summary: Smart but not smart enough

I think Ottomate is bold and ambitious in its quest to build a connected household but its first product already suffers from quality issues, especially in terms of execution. After a few weeks with the Ottomate Smart Fan, I’m left with the impression that it’s a noisy fan—noisier than the thirty-year-old Khaitan table fan my grandmother owns. It doesn’t help that at times, it takes longer to operate the fan through an Android smartphone than through a traditional regulator on the wall. In summary, the Ottomate Smart Fan is an advanced ceiling fan with the potential to be truly smart, but right now, is just trying too hard.